Volunteers Clean It ALL Up!

April 20th was a welcome gorgeous day after the spring rains.  The volunteers who gathered at the ODOT Sandshed were energized by the sun and that energy made the Forest Grove District’s 2019 SOLVE Day Clean-up held on Saturday, April 20th a resounding success.

Thank-you to everyone who participated.  It's obvious, Tillamook State Forest Volunteers ROCK!

At the end of the day 3 ODF staff members working with a group of 80 volunteers from a bunch of different clubs and organizations removed over 8,000 pounds of garbage (about 40 cubic yards) and 162 tires from the Tillamook State Forest in just under 4 hours!  Additionally, the spring spruce up of Stagecoach horse camp was completed including the removal of brush and installation of 6 bollard posts.

Clubs and Organizations Represented were:

Some of what was pulled out of the brush included:
Tires, tires and more tires
Several small appliances
3 vehicle dash boards
A bunkbed frame
10 bags of shotgun shells from  the Beaver Dam Rock Pit
Tons of items that had been used for targets


Thanks again for a great day in the woods!
Posted by TillamookStateForest at 10:17 AM

Thank-you to all 80 of the fantastic volunteers who came together on Saturday, March 30, 2019, to do a spring trail maintenance work party on the non-motorized trail network that meanders through the eastern half of the Tillamook State Forest! 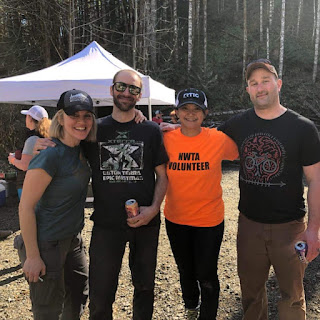 These enthusiastic volunteers completed pruning of trees and trail side vegetation, removal of down trees, cleaning of water drainage structures and general tread maintenance on 10 miles of the trail network in four hours of work time.

After the work was done, volunteers returned to Gales Creek Campground to enjoy a BBQ lunch hosted by Daybreak Racing and Oregon Equestrian Trails.  There were even raffle prizes donated by some of the work party partners. 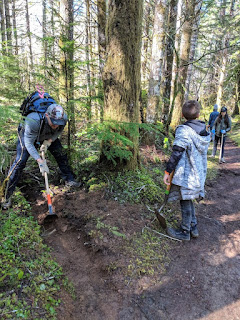 Plans are already in the works to make this Spring Spruce-Up an annual event to kick off the Oregon Department of Forestry work party season.  (Check out the volunteer tab for the 2019 trail work party schedule.)

Many thanks the following organizations who partnered to host the work party efforts:
And thanks to Nathan Frechen, Jeremy Long and Juntu Oberg for sharing their photographs from the day's activities! 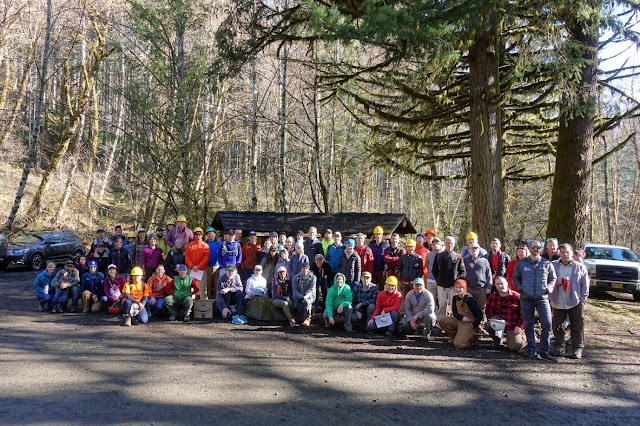 Posted by TillamookStateForest at 12:21 PM 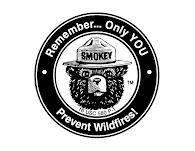